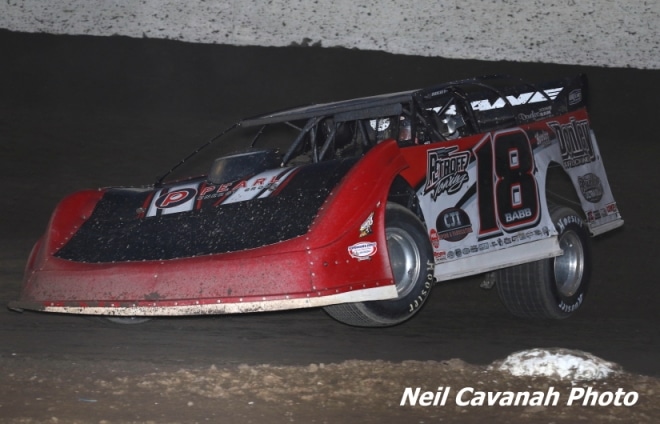 Haubstadt, IN – June 17, 2019 – Tri-State Speedway is once again one of the destinations as the annual Dirt Car Late Model Summer National competitors hit the road in 2019. The tour will embark to race at 26 speedways during a 31 day sweep across the Midwest. Tri-State Speedway will be hosting the late models on Sunday June 23rd. Drivers from all across the region will be battling for a feature check paying $5,000 to the winner.

The 2019 Summer Nationals schedule lists races at tracks in 8 states. Tri-State Speedway is one of only three tracks in Indiana hosting one of these events. The Tri-State June 23rd event is stop number 11. The event at Haubstadt follows five appearances for the tour at Illinois race tracks and is the night before a visit to Clarksville Speedway in Tennessee to conclude week two promoted as Legends Week.

Brian Shirley of Chatham, IL is the defending Late Model Summer Nationals Champion. Shirley won the feature on opening night at Kankakee Speedway on June 13th. Veteran Billy Moyer, of Batesville, AR, leads all late model drivers with six Summer National titles to his credit. Shannon Babb of Moweagwa, IL, won last year’s feature at Haubstadt followed by Turbo Tyler Erb of New Waverly, TX. Erb had won the feature there in 2017. Billy Moyer, Brian Shirley, and Rusty Schlenk rounded out the top five in 2018. The win for Babb was his third win in the last 5 SN races held at Haubstadt.

The Dirt Car UMP Open Wheel Modifieds will also be competing in a special event of their own on Sunday night the 23rd. This accompanying Summit Racing Equipment Modified Nationals will provide a purse that pays $1,500 to win. Former winners of this special event include Brandon McDowell, Levi Kissinger and Dustin Beck from Indiana. Winners from outside the state of Indiana include Trent Young from Kentucky, Jacob Poel from Michigan, and Mike Harrison from Illinois. This event always draws one of the largest fields of modified cars to be assembled each season. Thirty-eight modifieds were present for this year’s Summit Nationals opener.

Dirt Car Summer National races provide a unique brand of excitement beginning with flight qualifications. Excitement is rampant! As the heat races begin the walls strain to contain the action. Usual day in and day out hot temperatures mix with ever present hot laps! The result is a series that became known as the Hell Tour. Those high powered late model engines will fire at the 6 o’clock hour Racing is set to begin at 7:30 P.M. C.D.T.

On June 30th sprint car racing will return to Tri-State Speedway. The rescheduled SPRING SHOWDOWN will be held on a Sunday. That event, which was originally scheduled to be held on April 13th, features a co-sanctioned program combining the MSCS and USAC Sprints plus the UMP Modifieds. Race fans will be able to enjoy racing action two Sunday nights in a row at Tri-State Speedway.