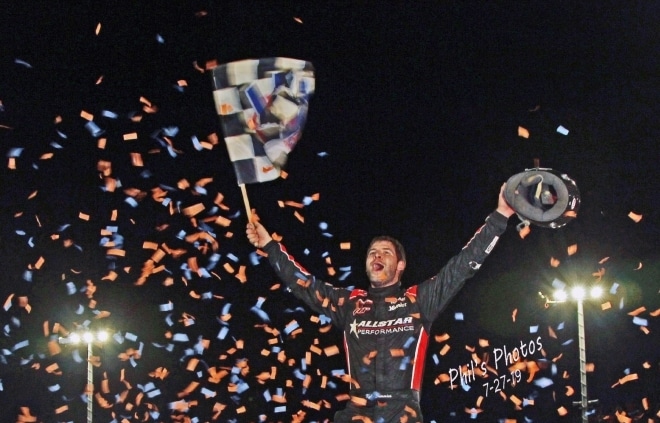 Haubstadt, IN – July 27, 2019 –  Saturday night’s Indiana Sprint Week Finale at Tri-State Speedway quickly turned into a dual between two local drivers.  The 30 lap A Main was a speed fest with Stephen Schnapf of Newburgh setting a blistering pace out front while Kye Cummins of Princeton took up the chase after starting fifth.  Schnapf started on the outside pole and led until the 27th lap.  Cummins passed him as the two negotiated the first turn.  Cummins continued in the lead to win the event.  His margin of victory was 1.6 seconds over Schnapf.

Cummins was at the wheel of the Hank Byram owned Rock Steady Sprinter wrenched by Tim Spindler.  Cummins described the contest with Schnapf as unbelievable.  Schnapf picked his way through lapped traffic. Cummins noted that the lapped traffic was where he needed to run to catch Schnapf.  But he found the opportunity and had the car to complete the pass.  It was Cummins fourth sprint car win in four attempts at Tri-State Speedway this season.  He remains undefeated while racing in feature events at Haubstadt in 2019.  It was also his second win this season during Indiana Sprint Week.

Justin Grant would finish third.  He was also the overall fastest qualifier with a lap of 13.539 seconds. Chase Stockon settled for fourth place after holding second spot for the first ten laps.  Brady Bacon was fifth and set the mark to become the Hard Charger after starting 15th in the 24 car field.

C. J. Leary had the seat of honor as the 2019 Indiana Sprint Week Champion.  He was center stage during post-race ceremonies in the promised Bridgeport rocking chair.  Leary was consistent all week in compiling top-ten finishes.  Leary finished 10th at the finale to add to his other top finishes including 2 seconds, 3 thirds, a fourth, and a sixth.  Leary drives for Reinbold/Underwood Racing based in Arizona.

Brandon McDowell won the UMP Open Wheel Modified feature.  It was his second feature victory in a row at Tri-State Speedway this season. The first-place check was worth a thousand dollars.  Mc Dowell was the most fortunate of the race leaders.  Dustin Beck led the first four laps before losing the lead to Stan Beadles.  Beadles could not avoid a spinning car about to be lapped and had to retire to the infield with front-end damage.  Beck reassumed the lead but it was short-lived as his car was damaged in a collision between turns one and two.  McDowell was in control of the race.

Tyler Weiss overtook Everett Bradham to earn the runner-up honors. The checkered flag was quickly replaced with the yellow as cars crashed in the fourth turn on the final lap.  Zach Fair and Don Brantley rounded out the top five.  Brantley also won the first heat after setting fast time.  Dustin Beck and Stan Beadles took the other two heat races.
The next event at Tri-State Speedway will be the Hoosier Sprint Nationals on August 10th.  The feature for MSCS Sprints pays $5,000 to win.  The winged 305 Race Saver Sprints and UMP Open Wheel Modifieds will also be on the program.